Carbohydrates – we really love them, don’t we? We just don’t like what they do to us, especially when they’re consumed with abandon.

However, if food were hard to come by, we’d love eating carbs and love what they do for us.

In Ohio, tomatoes grow practically like weeds – but have you ever thought how difficult it would be to stay alive eating tomatoes, dandelions, and cucumbers?

Carbs provide calories and fill us up. Which is more satisfying, a salad or a sandwich? Bread, rice, corn, potatoes, beans, grains – these are what give that feeling of satiation.

An adult requires about 300 pounds of carbohydrates per year to maintain a stable weight. That’s a lot of corn! In Ohio corn grows nearly as well as tomatoes (not quite as fast as weeds, however). This year I decided to try my hand at corn-growing and learned a thing or two.

First, I decided to try companion-planting, like Native Americans have done, using squash, corn, and beans in a Three Sisters Garden. The beans use the corn for support, and the squash provides ground cover. Not liking squash so much, I just went with my two favorite sisters, corn and beans. It worked out pretty well for the beans, not so well for the corn. Can you spot the beans dangling from the corn in the picture above? As it turns out, it’s a race between the beans and corn, and depends where and when you plant them. 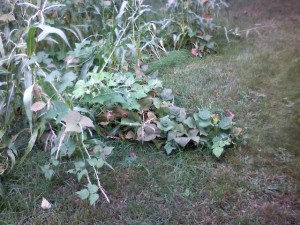 Here we see a case where the beans won.  They grew much faster than the corn and caused it to collapse. This defeated the goal of avoiding artifical props for the pole beans.In the next picture, below, you may be able to see a tapering of the height of the corn from front to back. When I planted the corn, it was a sunny day, with the sun high in the southern sky. However, after the summer solstice, the days grew shorter and the shadows grew longer, and some of my corn received less sunlight than I had planned. The tallest plants in the foreground were actually planted last but received the most sun.

I also learned a lesson from the squirrels. My neighbor sets out corn cobs for the squirrels, who carry them all over and drop kernels and cobs all over my yard. All summer I’ve been plucking and mowing the cornstalks that crop up randomly.

I bought a rototiller and tilled up the lawn to plant my corn, developing a bit of arthritis in a finger joint in the process. Toward the end of the corn-planting, when I was sick of the whole project, I decided to try it like the squirrels and just planted the corn in the grass, and voila, it grew just as well as in the tilled soil I had so carefully prepared. I’ve learned my lesson and next year, I’m doing it the squirrel-y way.

If planting’s too much work (and I’m thinking it may be), better stock up now on half a ton of grains and other carbs to see your family through a year.

CYNTHIA J KOELKER , MD is a board-certified family physician with over twenty years of clinical experience. A member of American Mensa, Dr. Koelker holds degrees in biology, humanities, medicine, and music from M.I.T., Case Western Reserve University School of Medicine, and the University of Akron. She served in the National Health Service Corps to finance her medical education.
View all posts by Cynthia J. Koelker, MD →
This entry was posted in Nutrition, Perennial Favorites, Preparation and tagged Bean, Companion planting, Maize, Native Americans in the United States, Ohio, Three Sisters. Bookmark the permalink.

5 Responses to Carbohydrates and Companion Planting